Posted on March 10, 2015 by knittingthestash

I’ve been on the lookout for some raw fiber ever since I acquired that Shacht spinning wheel. It turns out that Facebook has some pretty awesome groups–Raw Wool for Sale; Farm to Fiber and several others. As sometimes happens, people even need to destash fleeces and fibers (who knew?) and so, I was the recipient of some mixed fiber–my first ever raw fiber! This weekend it was time to get down to business. 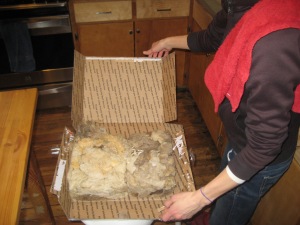 I had some sense that I could do this based on the wonderful world of YouTube and this lovely lady named Beth in my spinning guild who told me she “spins in the grease” and washes her fiber later–I was like, “huh, well then.” I had some crazy idea there were all kinds of rules . . . things you did and didn’t do, but, like knitting, it turns out processing fiber is done all kinds of ways (with a few basic principles in mind).

So, S and I cracked open the fiber box (ahh, smelled like sheep!) and got the sink cleared out and filled with HOT water and Dawn dish washing soap (to help break down the lanolin and clean out the dirt). We soaked the fibers in batches; in total, we finished about 2/3 of this box. We didn’t want to overcrowd the sink, that way the fiber and dirt could swim separately. The wash soaked (without agitation) for 15 min before the first rinse; then we rinsed again 2x more–basically until the water turned clear-ish. We tried to maintain the same temperature for each of the baths so that no felting would occur.

Once the fibers were clean, we pulled them out, placed them on a towel, rolled and pressed them gently (just like you would a wool sweater), and laid them out to dry on this great contraption S made from some clamps and aluminum screening. 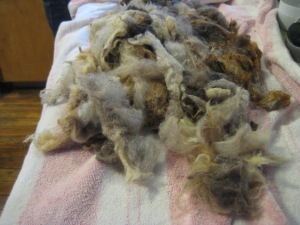 With air circulation above and below, the fibers began to dry immediately and by the next morning, they were quite fluffy! 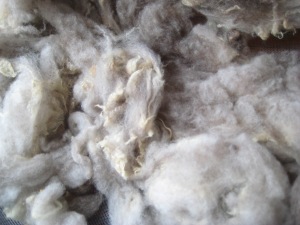 Since this was a de-stashed mixed box of fiber, you’ll notice lots of different colors, staple lengths, crimps, etc. But, to me, that is the fun of a first try like this: I would have been too nervous to process (and potentially ruin) a whole fleece, but this–this was manageable and fun. No pressure. And, there is the added bonus of seeing and comparing lots of different fibers.

When I went back to the box to see what was left, I had room to roll out the remaining fiber, and what did I find? A very large chunk of fleece! So, I will get a chance to try my hand at a piece of fleece after all. Plus, when I started to sort the dried fibers, I found what looks like another large single-breed fleece in the mix, so I separated it out and I’m looking forward to seeing what I can turn it all into!